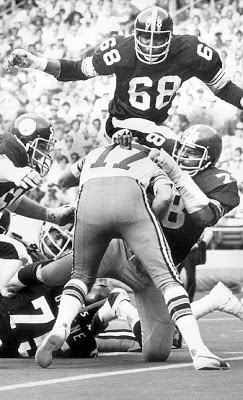 Steelers defensive end Dwight White, part of the famed ‘Steel Curtain’ defense, suffered a bout of pneumonia in 1975.  Despite the ailment, White made one of the biggest defensive stops in Steelers history.  Against the Minnesota Vikings in the Super Bowl, White helped the Steelers shut down Minnesota.  White broke free and sacked Vikings quarterback Fran Tarkenton in the end zone after the ball came loose on a fumbled hand-off.  It ultimately led to the Steelers winning the game and earning a Lombardi Trophy.

His teammates nicknamed White ‘Mad Dog’ and fellow defensive player Mike Wagner recalled, “(White’s) motor was high-rev.  As hard as he played, his mouth worked even harder.  He always amazed me he had so much energy.” Wagner added, “Dwight was going to make life miserable for anybody who didn’t have our jersey on.  That’s the way he played football.”

“(White) looked like he came out of a concentration camp with that pneumonia,” said Jack Ham.  “You talk about everybody rallying around something.  I could not believe he played that game.  That was a phenomenal thing.  He had such a resolve.  I don’t know how he did it.”

Dan Rooney once said, “Dwight White was one of the greatest players to ever wear a Steelers uniform.  He played with a relentlessness that led us to four Super Bowl titles in the 1970s.  Dwight refused to be denied.”