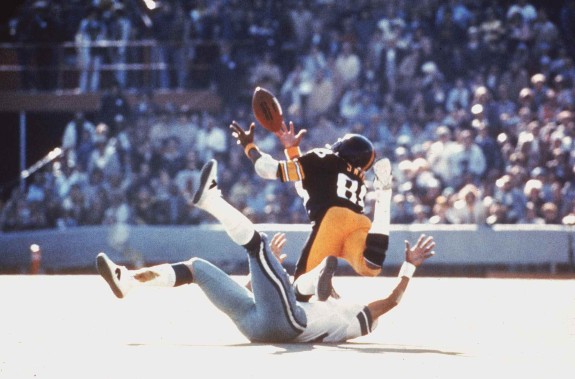 Before one of the most spectacular catches in Steelers history, receiver Lynn Swann nearly did not play in Super Bowl X due to a concussion he received in a previous game against the Raiders from a forearm from George Atkinson.  After spending two days in the hospital, Dallas safety Cliff Harris told Dallas press, “I’m not going to hurt anyone intentionally.  But getting hit again must be in the back of Swann’s mind.”  To that, Swann responded, “That ticked me off.  Nobody can tell me I can’t play this game.  So I took the challenge.”

Swann did more than accept the challenge – he made a statement.  After making a catch over two Cowboys defenders for a 32-yard pass from Terry Bradshwaw to set up the Steelers’ first touchdown, Swann made his second catch one for the history books.  The Steelers were facing third-and-six from their own 10-yard line.  Swann ran down the right seam, covered by Mark Washinton.  Although the ball was tipped, Swann fell onto his back with the ball in his hands.  Untouched, Swann got onto his feet, running for six more yards on a 53-yard gain.

To put a final touch on everything, Swann made an over-the-shoulder catch at a dead sprint (against Washington once again) that was a 64-yard touchdown bomb.