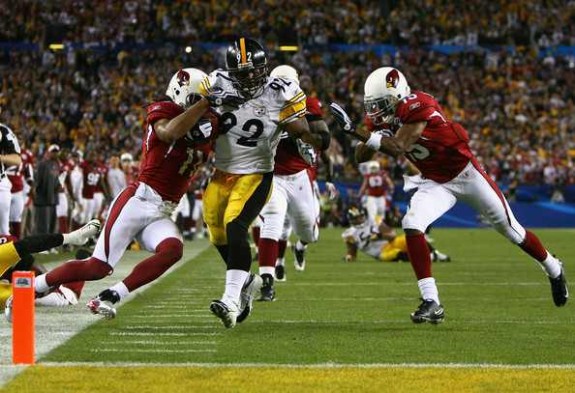 Arizona Cardinals quarterback Kurt Warner wasn’t even looking at James Harrison when he went for a long pass to receiver Larry Fitzgerald.  In fact, even teammate Troy Polamalu didn’t expect Harrison to end up with the ball.  It was Super Bowl XLIII and the Steelers were looking at a possible defeat as the Cardinals drove to the Steelers’ one-yard line late in the second quarter.

Safety Troy Polamalu was intended to blitz, but chose to remain glued to Fitzgerald in the slot.  Harrison dropped into coverage instead of blitzing as Warner looked for his receivers to come open.  One-on-one with Anquan Boldin, Harrison grabbed the pass and ran behind a wall of blockers, including cornerback Ike Taylor.  “I was behind him telling him to pitch me the ball,” said Taylor later.  “After about 20 yards…I just happened to block Fitzgerald off of default.  He tripped over me and fell, but I call that a block.”

In what was hailed by Polamalu as “the greatest play in Super Bowl history” at that time, Harrison weaved around Arizona players and finally collapsed in the end zone for the score.  That touchdown put the Steelers up 17-7 at halftime and helped create a win over the Cardinals, 27-23.